Finding a graveyard in Dallas

Finding a graveyard to shoot in:

I’ve shot two times in a graveyard and both times was run out — fortunately,  after I had enough footage, but not the footage I wanted!  So, this time I figured I would get permission, take my time, and maybe not feel so guilty about forging the location release — we’ve all done it.

Well, I don’t do it anymore.

So, I found this cemetery in Dallas by accident.  It just popped up from a parking lot I was in one day like the land of OZ.  I saw these bad-ass headstones from a not-so-fancy apartment complex through a chained fences: very old, very gothic, but not too cluttered like you sometimes see.  Anyway, I drove around and couldn’t find it.  Seems you have to enter the alley behind the SW BEll building to get to it.  It’s the McCree Cemetery in Lake Highlands off of Walnut and Audelia (9938 Audelia Rd).  Yeah, how many years have I missed that.  It’s cool, it’s very open with enough tombstones to give you the perfect backdrop and plenty of space to setup a jib.  Furthermore, the latest anyone was buried there was like 1942.  And the coup de grace, its a Historical Landmark. 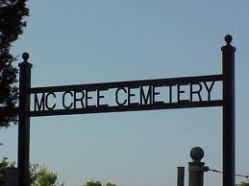 Well, I searched for week trying to find the owner (some guy called Ingress Egress) only to discover that ingress egress is the Latin word for the right to enter and leave.  So, I called the Dallas Film Commission and as usual they were extremely helpful.  They informed me it was private property and even gave me the ℅ address of the person.  Unfortunately, finding that person was as hard as finding a cemetery behind an eight story building in an alleyway:  the address didn’t exist.

So, I figured I had done my due diligence and would just go for it, but, have a location release from another cemetery as a backup plan.  That’s when I came across the words: McKinney Texas is Film Friendly.  “McKinney Texas,” I thought, “no way.”  Well it is.  And the graveyard I have permission to shoot is…  well, that will come in a later post because it is close to Halloween and I’m sure a lot of us are looking for cemeteries right now…

Oh, however, here is a clip I shot with my DSLR one afternoon with Melissa on one of our afternoon walks with the dead.  It’s something we do for fun.

If by a "Liberal," they mean someone who looks ahead and not behind, someone who welcomes new ideas without rigid reactions, someone who cares about the welfare of the people - their health, their housing, their schools, their jobs, their civil rights, and their civil liberties - someone who believes that we can break through the stalemate and suspicions that grip us in our policies abroad, if that is what they mean by a "Liberal," then I'm proud to say that I'm a "Liberal." ~~ JFK END_OF_DOCUMENT_TOKEN_TO_BE_REPLACED
This entry was posted on Thursday, October 3rd, 2013 at 09:27 and tagged with Cemetery, Dallas Film Scene, Festival News, Graveyard, Headstone, Lake Highlands, Texas and posted in tvboogie. You can follow any responses to this entry through the RSS 2.0 feed.
Drew Barrymore talks film in Dallas »